This piece was written for and dedicated to James Kevin Gray— a dear friend and incredible colleague.

In this sonnet filled with vivid word pictures, Constable honors St. Michael the Archangel and his great power by recounting in 14 lines of text Michael’s epic battle with the devil as found in the book of Revelation

Angels are mentioned nearly 275 times in the bible yet we know very little about them. And while many think of angles as Cherubim and Seraphim, angels are far more powerful these baby angels. The Archangel Michael, sometimes called St. Michael, holds a special place in the hierarchy of angels for it was he who led the good angels- the host of heaven- in victory against Lucifer, a once beautiful now fallen angel, and his army of angelic rebels.
Satan was once the heavenly angel Lucifer, “the prince of angels,” and the “pride of heaven.” “Pride comes before a fall,” and since his fall he has been known as Satan, the Devil, the Dragon, and the Beast.

God chose Michael whose name means “Who is like God?” as the Chief of the host of heaven and Michael wields the power of the Almighty God. He vanquished the devil, and continues fighting for God’s cause as the defender of God’s spouse and the bride of Christ— God’s church.
Like the Icon of Archangel Michael by Theodoros Pulakis, artists have often shown Michael as a young, iron-clad warrior with a sword, standing victorious atop the dragon. This image harkens back to images of a valiant medieval knight who conquered the dragon-beast to protect and win the hand of his Lady.

I chose to work in the key of G because I like to compose in that key, but also because “God” starts with G.
In a serialistic way, I used pitches in the melody to represent “characters" of the piece. For God, “G” would be the perfect choice but instead, I used “D” so that God is right in the middle of this sonic universe. With Michael being one level below God, I used “C.” I used “B” for Heaven and Angels. “G”- the home tone, represents God’s spouse, the church. The Devil is usually portrayed with and augmented fourth/diminished fifth. In that case, the C#/Db would either be above God or would be too low in the melody so instead, I went with F-natural as it is not in the Key. It is outside the diatonic scale.
We’ve heard the phrase, “The trumpet shall sound.” In this case, “the trombone shall sound.” Composer such as Bach, Mozart, and Beethoven thought of the trombone as ‘the voice of God’ and used as such in their composition. I have an affinity for the trombone as I was a trombone major for half of my undergrad studies before falling in love with choral music. 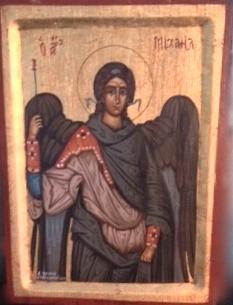 Then use arrows to scroll

God Chose for Chief His Champion